By way of a one off ‘Editorial’ and in honour of those men and horses that gave so much in the First World War we give you an excerpt from our book Great days Two which recounts some of the exploits of The Battle Hunt Club. 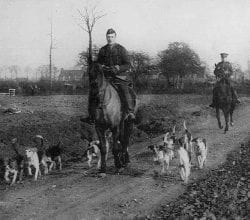 In 1914-15 the British Army in the field, in its hours of relief from fighting, planned out quite a remarkably attractive programme of diversions for the weary winter days and evenings.

The formation of the ‘Battle Hunt Club’ was planned when officers returning from a scouting expedition reported that, apart from a force of Germans entrenched in such and such place, the country simply abounded in foxes, which were suffering death from shell, small arms fire and virulent mange.  They respectfully submitted to their superiors that, while British cavalry officers were about, such things could hardly allowed to continue, and that while they were off duty it would be a good idea to have little hunting ‘just to keep condition.’
The matter was brought to the attention of the Commander-in-Chief, who had no objection to giving the idea a trial and so behind the trenches in Flanders the Battle Hunt Club was formed; a Hunt Committee was formed this included several French officers  one of whose duties it was to impress upon their comrades that, under no circumstances, were any of them to emulate the achievement of Brigadier Gerard, of Napoleonic fame! It vexed the souls of our sporting officers that good foxes should be destroyed by German shell, and, since the little red varmint abounds, they have arranged to have imported twenty-six couple of hounds, on the strict understanding that any who breaks his collar-bone or founders his horse whilst hunting will be tried by court-martial.

A day with hounds as respite from the front

The result was that fifty-two foxhounds arrived in Boulogne and were sent to the “Battle Hunt Club” headquarters, somewhere very near the firing line. It is understood that the first meet was highly successful. Besides British and French officers who had been granted a few hours’ rest in the saddle or the trenches, several society ladies, well-known cross-country riders, who are now engaged in Red Cross work at the front, followed the hounds, running several foxes to earth and on one particular day rolling over three foxes. In addition, in 1915 perhaps on the strength of the success of the foxhounds, Captain Lieutenant Charles Williams, of the 4th Dragoon Guards. returned home and obtained the loan of the pack of Mr. Ernest Robinson, of Leighton Buzzard, who generously offered to lend them, and expressed the cordial hope that the officers and men at the front would enjoy good sport with them.

By late 1915 there were five packs of beagles in Flanders which were only failing to kill quantities of hares as they were reported to be so numerous that there was frequent change in the hunted hare.
One verifiable anecdote of the time involved a keen beagler an Artillery officer some means or other brought out to the regiment, which was then in the front line opposite Messines, a couple and a half of beagles. They were nothing wonderful in the way of beagles, but he brought them out safely probably by labelling them as property of a General. One day the regiment was in billets for the usual four days out of the line and for this officer that meant time to go hare-chasing. It was a muddy, cold, regular Flanders day and the procession, all going slowly, was as follows; first a rather bored hare, then eventually the couple and a half of earnest and aged beagles accompanied by our erstwhile MH with most of the scenery on his boots. Plodding along, the pack crossed the front of a howitzer battery which at that moment pooped off.  Down went the sterns of the little hounds as they fled in different directions. Not so our keen beagler, who stopped, and bristling with indignation, shouted to the O.C. Battery, “Damn it, Sir, how dare you let off your beastly guns when my hounds are running!”

We update the website on a daily basis including staff changes across the hunting world, images from some of the best hunt following photographers in the world and new incisive and informative articles.

If you are already setup on this new website you can login here.

If you are new to Bailys you can subscribe here.