Another popular area of hunting-related collecting is that of antique horns, with some collectors concentrating on the ‘upper end’ and Presentation pieces.  Recently, one such presentation (or testimonial) horn helped to solve a button collectors mystery.  As ever, it was a question of finding the links and cross-referring various pieces of information that already existed to fit the jigsaw together.

I am talking about the elusive ‘Haverfordwest Hunt‘, that appears in numerous lists and publications, with J. Lort Stokes as Master, but for which solid records have not been found and a button not identified.  However, a glorious train of serendipity has, I believe, solved the mystery.

A recent auction included this silver horn, engraved with a citation to Admiral J. Lort Stokes of Haverfordwest, and the auctioneer’s description named him as being Master of the Scotchwell Harriers – a pack that didn’t immediately ring a bell with me, or several other people I asked. 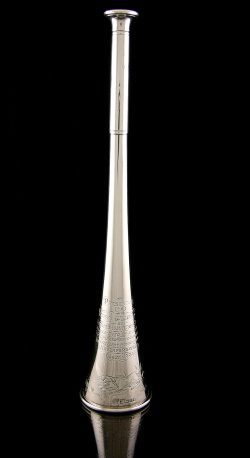 I could find no references to the Scotchwell in the ‘usual’ sources, but found it in E. Wathan Price’s ‘Horn and Hound in Wales.’

Here is what Wathen Price has to say:

Coincidentally, I had just bought a number of hunt buttons from America that included on with a paper sticker on the back saying simply Scotchwell.  Again, it meant nothing to me, and I wondered if it might be an American pack. 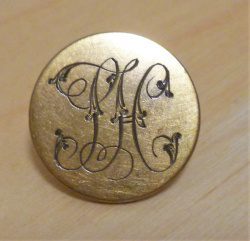 I mentioned this on a well-known social network site and Baily’s own extensive research library came up with a fabulous article that tells us all about the horn and its presentation.  Below is an extract, and there is a link to the whole report at the bottom.

“To Admiral J. Lort Stokes.  Dear Sir, We, the undersigned, most respectfully beg your acceptance of the accompanying silver horn and salver, as an expression of our sincere regard.  We have never failed to find in you those noble qualities that are characteristic of a true gentleman, as a landlord and otherwise.  We ask you not to look upon this memento as adequately representing our sense of the ready and kind generosity received at your hands in so many ways.  Owing to your unselfish and genial disposition an admirable pack of hounds is kept at your sole expense.  We hope you may yourself enjoy the old and manly sport, and that all, whether rich or poor, may join in the healthy recreation.

A very handsome testimonial was presented to Admiral Stokes on the 5th August, in recognition of his liberality in hunting the Scotchwell harriers for so many years. The testimonial consisted of a silver salver and a silver hunting horn, which were provided by means of a subscription raised among those who have been accustomed to participate in the sport which has been generously provided by the Master. The presentation took place at the Mill Inn, Cartlett, and was made on behalf of the subscribers by a committee. Mr. T. P. said that he had been requested to read the address, to which was appended the names of the subscribers to the presentation fund. The address, which was written in ornamental writing and illuminated, was in these terms : “To ADMIRAL J. LORT STOKES. “Dear Sir,—We, the undersigned, most respectfully beg your acceptance of the accompanying silver horn and salver as en expression of our sincere regard. We have never failed to find in you those noble qualities that are characteristic of a true gentleman as a landlord and otherwise. We would ask you not to look upon this memento as adequately representing our sense of the ready and kind generosity received at your hands in so many ways. Owing to your unselfish and genial disposition an admirable pack of hounds are kept at your sole expense. We hope you may yourself enjoy the old and manly sport, and that all, whether rich or poor, may join in the healthy recreation. We conclude this brief address with the expression of the hope that your agreeable and kindly presence, and that of your kind lady, Mrs. Stokes, may be long spared to us.” Mr. then said :—lt now becomes my duty to offer fur your acceptance our small present, consisting of a salver and a hunting horn, on which are engraved inscriptions explaining the feeling in which they have originated.

The committee have found the task connected with the movement a very light one, and have derived great pleasure in its performance. I. think, Sir, you will find the born a good one. and we hope to hear the sound of it for many years to come. (Hear, hear.) Admiral &men, in responding, said : – Mr. Jenkins, Mr. Garrett, my hunting and other friends : Most sincerely do I thank you for the complimentary manner you have been pleased to speak of the Scotchwell Harriers and their Master. No words can convey to you may heartfelt gratification at the very liberal and marked way you have appreciated the sport shown by my hounds during now nearly fourteen years. For that sport I ant indebted to the kindness of the landowners in allowing me to hunt over their country, and especially to the tenants for the praiseworthy care they have taken of the hares. Of this rest assured that, as a rule, it will be found that the real preservers of game tare the tenants.

Your most generous and quite unlooked-for presentation of plate, and the greatly-valued good feeling with which that gift is associated, particularly as coming almost from working men, mike goes hones to my heart, and dearly will it be treasured as an heirloom in my family, and serve as a reminder of the Scotchwell Harrier contribution to the hunting in mid-Pembrokeshire. Again and again, I beg to thank you for the honour you have this day done me, and before sitting ‘down would beg to offer my especial thanks to the originator and getters-up of this hunting testimonial. (Hear, hear.) Mr. W. Jonas said:—Admiral Stokes and gentlemen, I will, with your permission, say a few words. It affords me the greatest pleasure to witness the presentation of a testimonial to a gentleman, who, when a boy, fired with the love of adventure, selected the sea as a profession to gratify a taste for travel and discovery. Entering the Royal Navy as a middy—and a diminutive one, too—he commenced a long and honourable career, rising by perseverance and ability to a proud position under the blue ensign.

The gallant admiral was a companion of the late Professor Darwin, and by their united discoveries during a memorable voyage of exploration in the they materially added to the advancement of science, geographical knowledge, and the success of commerce.  In that perilous enterprise, the value of his services were nearly lost to his country by the treacherous and unerring throw of the spear of an Australian savage. On retiring from the service, the gallant admiral returned to the home of his birth, not only to pass his days as a country gentleman, discharging all his obligations to the State, including magisterial ditties, with even-handed justice, but at considerable trouble and expense provided ore of the prettiest packs of harriers in Wales, with the necessary mounts, As, to afford sport free of cost to all who love the Chase.

lam sure I only express the sincerest wishes of this company that the Admiral and his lady may be spared many years, and that no change will occur in our relationship. (Hear, hear.) On the salver and born were swami the following inscription : “Presented to Admiral J. Lort Stokes by tenants and numerous friends as a memento of many years sport and pleasure in connection with his excellent pack of hounds Haverfordwest, July, 1884.” Both articles were of very pretty design, and were neatly and skilfully ornamented. They were supplied by Mr. Hood Williams, of High-street. We have been, requested by Admiral Stokes to insert the following :– Admiral J. Lort Stokes begs through the Press to very sincerely thank those kind and generous subscribers to his hunting testimonial who did not witness its presentation by the Committee yesterday at the Mill lnn, Haverfordwest. —Scotchwell, 6th August, 1884.

1885 Report
We hear that Captain T. P. Lewes has bought that old-established pack known as the Scotchwell Harriers (the property of the late Admiral J. Lort-Stokes). The pack consists of 16 couples of beautiful, level, self-working 18in hound 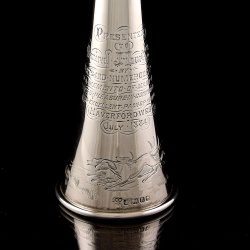 In conclusion, it would seem that the mysterious ‘Haverfordwest Hunt’ had been hiding in plain-sight all along, simply under its real name of The Scotchwell Harriers.