Whilst not strictly a button, I thought it worth sharing this unusual find. 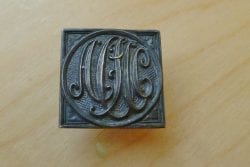 This lapel badge is for the Aldershot Command Hunt Club, which I believe pre-dates the Foot Beagles (A.C.F.B).  Made by F. Phillips (Medalists) of Aldershot, it is either unmarked silver or silver plated, and has been professionally blackened. {The button being this design in gilt brass}.

The style of the badge is late 19th century, perhaps even first quarter 20th, and Phillips were definitely in operation from 1860’s into the 1940’s and beyond. 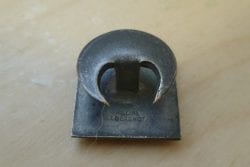 As far as I can make out from internet references, the title Aldershot Command was instated in 1881, even though a camp was there from the 1850s.  There was a pack of beagles there from 1871 to 1946, which may have been known simply as The Aldershot, and is most likely that of the Hunt Club.  The Aldershot Command Foot Beagles appear to have been in operation from 1946 to 1989, and their button was A.C.F.B in plain caps. 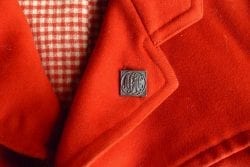 The question in my mind then, is “Why the blackened finish?”

We know that the origin of most blackened buttons etc was to mark the death of Queen Victoria, when many hunt buttons were either produced as ‘Mourning buttons’ or were adapted to take on a mourning role. (see previous blog about blackened buttons).  If the badge is later than 1901 for whose passing has it been blackened to respect?

I need a military person to confirm this, but it has also been mentioned to me that ‘Forces packs’ wore black at the end of the First World War to commemorate their fallen colleagues.  Can anyone tell me if this is the case?