Following hard on the heels of my post about Mr Riddle’s Hounds, I am seeking help from anyone, but particularly our hunting cousins ‘across the herring pond’ in the USA and Canada.

The button below is currently winging its way to me from La Follette, Tennessee, via a good chum in Florida. For those that are interested, it’s a very heavy and high-quality button; beautifully engraved, cast then struck with high gilt finish and burnished rim.  But it is its age that has surprised us. 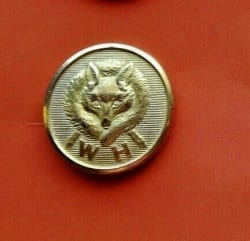 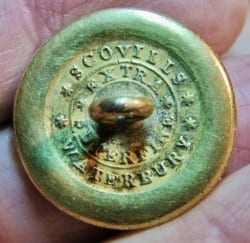 According to the reference book on dating American buttons, by Tice, this backmark places the button between only the years 1835 and 1837.  Whilst not at the very birth of hunting in the US – Lord Baltimore took his hounds with him in 1650, and George Washington had his own pack at Mount Vernon in the 1700’s – it is very early for a formalised pack with a button of this manufacture.

That brings us to the obvious question:  Which pack is it?

My 1928 edition of ‘Hunting in the United States and Canada‘ gives two potential ‘WH’ packs that date back that far:  The Whitelands Hunt in Pennsylvania that, in its original iteration, began in around 1821 and hunted as a trencher pack until approximately 1851; and possibly The Warrenton Hunt in Virginia – hounds having hunted that area from 1790 under Colonel Winter Payne of Clifton.  It is, of course, early enough to be one of the many private packs that existed before the more organised Hunt ‘Clubs’ existed.

So, can anyone help put a name to a fox mask?  It’s a long shot, but in every hunting community there seems to be an historian that holds the knowledge of generations, and I’m hoping to find one.