Beware of Fakes and Copies

Collectors of any item of interest and/or value have always had to be on the look-out for replicas, copies and outright fakes masquerading as genuine, to make someone else ‘a quick buck’.  And would you believe that hunt button collectors are no different, and have to be on their guard as well?  Who’da thunk it?

In the late 1980s and into the 1990s a certain gentleman (whose name is known, but will not be used) became notorious for reproducing buttons by re-casting and selling them as original.

There were a number of these re-cast buttons circulating, and I expect quite a few are in people’s collections.  I found five in my own collection!  The list of known fakes at the time included (and there were probably more):

Also, it is believed that a different, and unidentified, individual had bought a number of Pitt & Co. brass blanks and was attempting to reproduce very rare buttons by engraving the blanks.

So, how can one spot these fakes?  There are five main things to watch for:

Size.  Having been made from a cast taken from an original button, the fakes are very often slightly larger than they should be.

Quality of casting.  Most often the quality of finish is poor, with the design being off-centre, or ‘blurred’ and the metal having a pitted appearance, or bubbles in the surface.

Profile.  Generally, because of the difficulty in reproducing convex buttons using a mould instead of striking them, the copies are nearly always flat, when they should have a slight curved profile to them.

Cast marks.  On the buttons made by our notorious ‘friend’, there were very often two or three small circular cast marks on the reverse, where the mould was held.  Eventually, the maker caught on that we had caught on, and began filing them off.

Sound.  In some cases, the brass used was of a lesser quality and some buttons had a definite ‘ring’ when struck, that the original heavy-weight brass buttons do not.

I don’t know how clear things will be in these photos, but I hope to illustrate a couple of the give-aways by showing you the buttons I found in my collection.

This button is a full 1mm wider than it should be (at 25mm) for this pattern and perfectly flat.  Take a look at the poor quality of the moulding on the face, with large areas missing on the coronet and the top of the ‘O’, and the lines of the field are at a diagonal in the ‘squished’ right-hand side of the coronet.  It also has lots of bubbles in the surface, and you can clearly see (in the second photo) that the mould was taken from a dented button, as there is an additional ‘edge’ at 12 – 2 position.  The backmark is off-centre and the gilding is a very poor colour on the front.  The reverse has a totally different colour gilt all together,  and the gilt on both sides is very thin indeed with the base metal showing through. 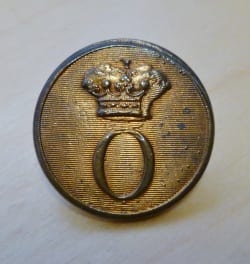 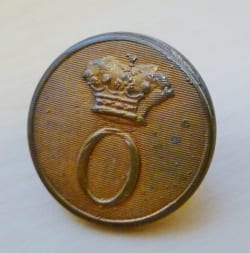 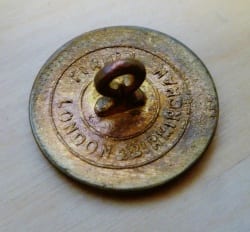 Similarly to the Oakley, this button is again over-sized and flat.  It’s difficult to see, but the central design is badly cast and blurry, and the entire rim is knobbly and pitted, instead of a lovely burnished finish.  The reverse is very poorly cast and finished with the shank just hanging on there by the skin of its teeth!  This button has the distinctive ‘ring’ I mentioned, because it is made of such a thin and lesser alloy of brass. 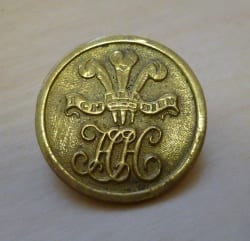 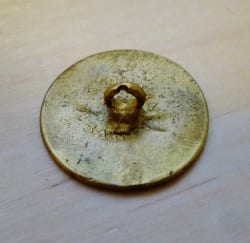 It’s not clear if this button is an out-and-out fake, or a reasonable copy, made for the pack.  Nevertheless, it displays a couple of things that are distinct to re-casts: The tell-tale pillar marks from the ‘amateur’ mould.  In this photo you should be able to make them out at the 1, 3 and 9 o’clock positions. Also, the ‘O’ of London has been over-struck in a different type-face on top of the pillar mark at 9 o’clock . 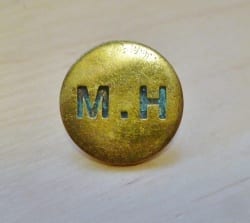 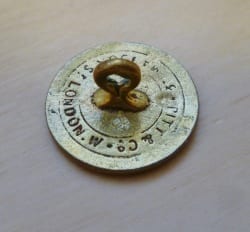 The North Tyne Fake of a Copy.

It is known that new buttons were commissioned for the North Tyne Hunt, but very soon afterwards a number of unofficial ones hit the open market.  Look at the poor detail of Charlie on the face of the button, and the really poor casting and the cracks and pillar marks on the reverse. 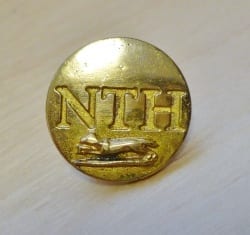 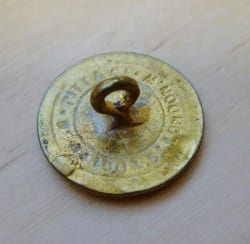 This is a prime example of the ones that may have been engraved onto old Pitt & Co blanks.  John Musters’ pack existed in different forms, at various times from the late 1700s until John Chaworth-Muster was Master of the Pytchley between 1871 and 1876, when the pack took his name.  The backmark on this button is a perfectly good Pitt mark from 1875 onward, but just look at that shaky, thin engraving.  I really doubt that this JMH is ‘kosher’, and I may as well chuck the darn thing away. 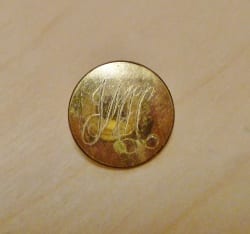 So, even for something as ‘niche’ a collecting field as hunt buttons, Caveat Emptor (Buyer Beware) still applies.

There is a different side to this though.  Many hunts cannot afford the expense of having new dies sunk by the ‘Big Two’ manufacturers, if they need new buttons.  Some will pay for ‘amateur’ re-castings, and that’s fair enough.  But, let’s not forget that there are companies out there that will make faithful reproductions of hunt buttons – officially for the hunts in question, and not just for the passing collector.  A lady called Kathryn Butler in the US ( owner of a pack of foxhounds and of beagles herself) comes to mind.  She makes very good quality reproduction buttons for hunts in the UK and North America, and there may be others.  But, WATCH OUT for those fakes.


4 responses to “Beware of Fakes and Copies”