Catching Up After a Long Break.

After being away for quite a long break, I thought I would use this opportunity to catch up on some previous articles, and share some new discoveries

Here are two new acquisitions with which I am particularly pleased. 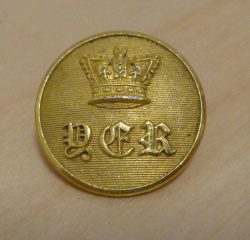 This is an early hunt button for the 15th (Yorkshire East Riding) Regiment of Foot.  A pre-1881 button. 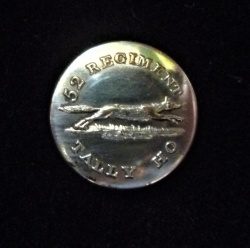 This stunner is a Georgian button for the 52nd (The Oxfordshire) Regiment Hunt.  One of those rare regimental hunt buttons that actually feature a quarry animal.

Now looking at some new finds that require identification:  Any help would be much appreciated. 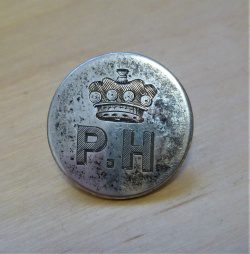 Firstly, this superb nickel silver button with a Baron’s coronet. 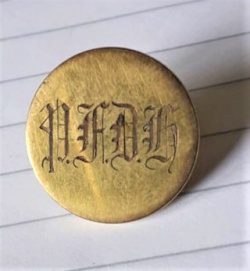 P.F.D.H.  I’m struggling to find what this might be.  I am assuming it is a hunt button, and probably Drag Hounds, but no luck yet. 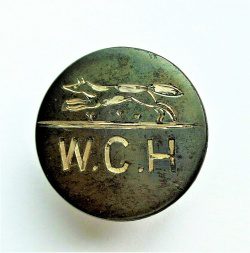 This W.C.H. is on its way to me from the USA.  It carries a H & G Philla and NY backmark.  It could be the West Chester, or the Westchester County.  As soon as I find out I’ll let everyone know. 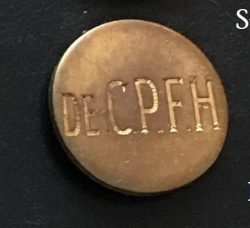 This little blighter is a cause for debate.  The initials do of course resonate with C.N De Courcy Parry (aka Dalesman) whom was MFH to numerous packs of hounds, but never one under his own name (as far as we can see.  Thanks to D. Collop for his research).  So, is it genuine, or a ‘con job’?  Well, it’s coming from the collection of the USA’s most respected collector of hunt buttons, and as soon as it get to me I’ll get it under a magnifying glass. 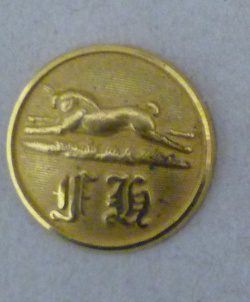 A rather lovely F.H.  As yet unidentified, but there is a coincidence that just might be too much to ignore.  These buttons came to me from Anglesey, and there was a Mr Fuller’s Harriers that hunted around the Bodorgan area on the Island around the time these buttons were manufactured.  I wonder?

Going back quite a way to when I looked at how to display your buttons.

I previously featured a lovely framed set of Essex Staghounds buttons owned by Christine Jacobi.  Here is a rather nice idea (I might steal it) that she has produced recently, using an old photograph of the Puckeridge as a background for a part set of their buttons. 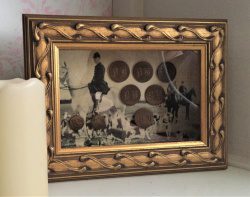 Finally, to end this quick catch up, two ‘dug’ buttons that I was delighted to have the opportunity to purchase from the detectorist finder. 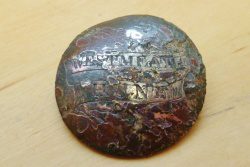 Poor condition, but still a rare find of a Westmeath Hunt button.  Given its age, construction and similarity to other Irish buttons, I am currently assuming that this is the first pattern used……..unless anyone knows of an earlier one. 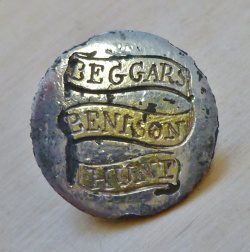 Beautifully tricked out with parcel gilt in the uniquely Irish tradition, this Beggars’ Benison button is the first I’ve seen of this somewhat notorious hunt.  It can only be assumed and not proven that they had links with the infamous Beggars’ Benison Club across the water in Scotland, but they certainly had the mis-fortune of losing an entire pack of hounds to drowning when crossing a lake.

I hope that rapid run-through ‘The News’ has been entertaining.