I’ve been keeping myself occupied by rootling through boxes of ‘odds & sods’ that I have accumulated over the years and, whilst mainly finding old military and costume buttons, I have come across one or two that took my eye and (to mix my metaphors) rang a bell.

This one in particular has raised an interesting question, which I wonder if any BHD readers can answer. 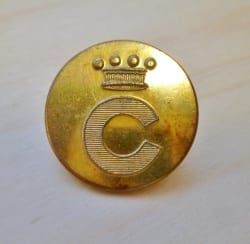 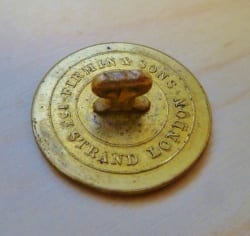 I knew I had seen it somewhere before, and was convinced that it was a hunt button, even though there wasn’t one ‘officially’ in The Firebrand Collection.  I’m pleased to say that it didn’t take me very long to refer to the Firmin pattern book images and……Whoo-whoop! 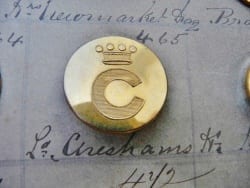 This was not a name or pack with which I was immediately familiar, so off to the internet I toddle……and a most interesting story with a tragic ending unfolded; and has raised the question to which I seek an answer.

Charles Compton William Cavendish, 3rd Baron Chesham  (13 December 1850 – 9 November 1907),  was appointed Master of HM Buckhounds in 1900.  Hunting was his passion.  From 1885 until 1893 he is listed Master of the Bicester & Warden Hill Hounds.  Although his county seat was Latimer House in Buckinghamshire, he rode all over the country, especially the Grafton and Warwickshire Hunts, but particularly enjoyed the Pytchley. One of his closest friends was Lord Annaly of Holdenby House who was Master of the Pytchley. In the last two seasons of his life he hunted from Boughton Park, twixt Northampton and Peterborough.

One story tells of a day when Lord Chesham was hunting, he noticed that a regular follower from Northampton, who used to help hold the horses, was absent.  He discovered that the man’s daughter had died. The next day he sent his chauffeur into town to pay all the funeral costs and also to give a sum of money for the family.

On the fateful day he was out with the Pytchley at Welton near Daventry.  His horse jumped a fence but did not clear the ditch on the other side. Lord Chesham was thrown and suffered a broken neck.  He was buried on 14th November 1907 at Latimers in Chesham, Buckinghamshire.

Such was his popularity that when Lord Annaly opened a fund to erect a memorial, over 350 contributed, including heads of state, those who served with him and those from other walks of life who had admired him.  This is why the memorial was erected in October 1908 in Brixworth, in Pytchley country.

At the base of the column it reads:

“Erected by friends in the Pytchley Country

to the memory of Charles William, third Baron Chesham, K.C.B.,

who met his death while hunting with the Pytchley hounds,

A good man; a gallant soldier; a true sportsman.”

So, now I come to the question of his button.  I can’t (yet) find a reference to Chesham running his own pack of hounds, and I don’t think Masters of The Buckhounds created a personal button, but I’m happy to be corrected on that, because there is an unconfirmed button, that some say was used by Earl Bessborough during his Mastership of the Buckhounds…..but it’s highly dubious.

Am I then to conclude that the button marked in the Firmin pattern book as ‘Ld Chesham’s Ht’ is a ‘personal’ button and relates specifically to his term with the Bicester & Warden Hill?  Any confirmation out there?

There is also a stone trough commemorating Lord Chesham, and to conclude this article I will quote the inscription, as I think it’s a worthy statement for us all.

“I shall pass through this world but once. Any good thing therefore that I can do, or any kindness that I can show any human being, let me do it now; let me not neglect to, nor defer it, for I shall not pass this way again.”