Over recent weeks Baily’s have added  a number of images of military and regimental packs to the image Gallery.  These have sent me scurrying to see if the pack(s) in question have a known hunt button or not.

The subject of military hunt buttons is one fraught with contention.  One could say it’s a minefield; and it raises the age old question of whether something is a ‘hunt button‘ or a ‘button used whilst hunting’.

The difference seems to hinge on whether the particular regiment, brigade or corps actually kept it’s own pack of hounds or not.  Sometimes this is easy to discover – Baily’s over the years has listed many Armed Forces packs.  However, other times, the answer lies in a pack’s history.  There are well-known subscription hunts that are the direct descendants of barrack packs.

A perfect example of this being one of the better known packs of otter hounds.  This particular pack began as the regimental pack of the King’s Own Shropshire Light Infantry (KOSLI) when stationed at Pembroke Dock.  Hounds were kennelled nearby in the village of Milton, and the pack was known as the 53rd (or The Milton) Otter Hounds.  When the KOSLI left Pembroke Dock , hounds were sold to a committee of local gentlemen, that changed the name to the Pembrokeshire & Carmarthen Otter Hounds.

Sometimes, though, we will never know for sure, and a button is generally accepted as being such-and-such regiment’s hunt button.  The biggest debate of all is generally – “If the button on the hunt coat is identical to the blazer button, which is it?”  Of course, we have to apply Rule No. 1 of Hunt Button collecting, i.e.  “If it ain’t for a hunt coat, or off a hunt coat……… it ain’t a hunt button.”

Over the next couple of ‘Firebrand‘ posts I will look at the subject.  In this first one I shall look at the more well known examples and a few of my favourites.   In the second part I will look at some early versions from the reigns of William IV and Queen Victoria.  I am not a military historian, and much will be received wisdom.  Please!  If you’re a military bod and can shed light, or put me straight on anything, I would be delighted to hear from you.

Just to set the ball rolling, here are some images of buttons that are all accepted as being military hunts’.  These six images are reproduced (with my thanks) from the late Neil McShane’s excellent book.  N.B. Images are now ‘super-sizable’ with a simple click.  An interesting comment on the 7th (Queen’s Own) Hussars’ button is that the original hunt button, when they ran hounds, was solid silver, or silver plate for officers, brass for ORs; but when they gave up hounds and it became a simple saddle club, the button became brass and the design now includes a leaping horse. 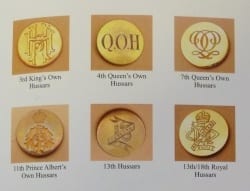 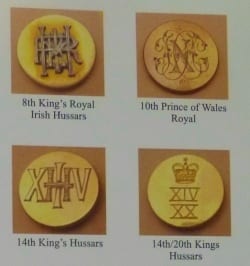 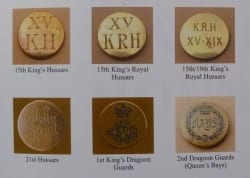 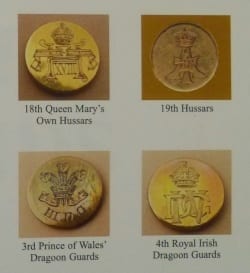 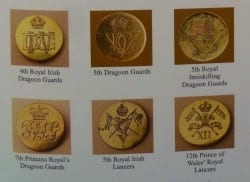 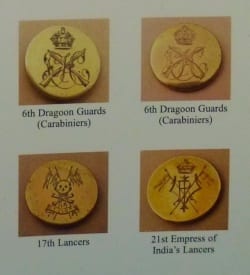 Below is a list of those units that I believe I have identified so far as having ran hounds and, therefore, have official hunt buttons:  NB.  There may be apparent duplications as regiments gained Royal patronage / Command.

POSSIBLY REGIMENTAL BUTTONS USED FOR HUNTING:  This doesn’t mean they didn’t run a pack, just that I’ve not found documentary evidence for a working pack of hounds…..yet!

Considering the huge list above, it’s difficult to know on which ones to focus, so here are just a few of my personal favourites.  All of which meet Rule No. 1 above. 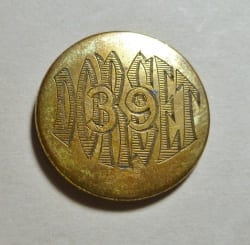 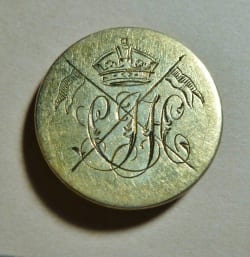 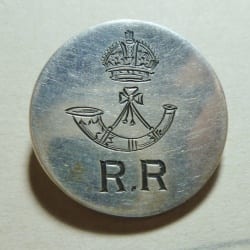 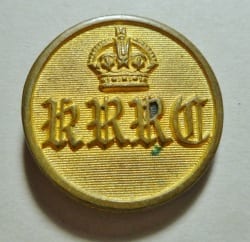 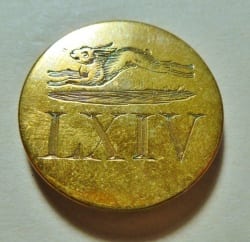 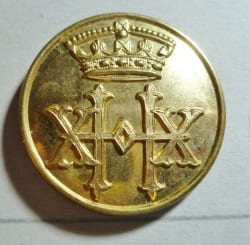 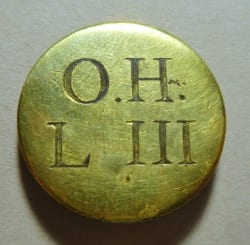 Conventional wisdom was that Cavalry regiments ran foxhounds – what better way than hunting to train young cornets to control a mount at speed? – Infantry regiments, RAF and the Senior Service ran beagles, and Artillery ran draghounds; and it has been interesting to see some of the images in the Gallery, including The Royal Scots Greys’ beagles, as a case to show they ran both fox and hare hounds, and so this ‘wisdom’ wasn’t always the case.  Helen Roiz, a hunt button collector in the US, has recently unearthed the 11th Devonshire Regiment button showing a running fox.  Given the debate, it’s always good to find a button featuring a quarry animal. 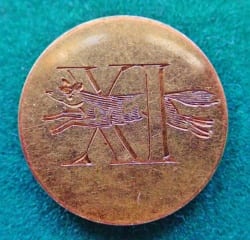 If you have any comments to offer, corrections to make or additions, we’d be delighted to hear from you.  Next time, I will look at earlier examples of military hunt buttons, from the mid-1800s.