The Mystery of The North Durham & Northumberland Hunt. (Solved!)

Recently an ancient hunt coat turned up for auction featuring a most interesting set of buttons bearing the letters NDN in ‘Acanthus script’.   Until the coat itself appeared, the only reference I had found to this particular button had been in a Firmin maker’s pattern book dating from the late 19th century that was sold to an American in the 1950s.  (later reproduced by Neil McShane in his book) It is clearly annotated as ‘North Durham & Northumberland Hunt’ 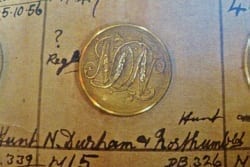 In the pattern book, the button has the note:  ? Regl which, reading ‘The Story of the Firmin Pattern Books‘, tells me that Firmin & Sons were unsure whether this is the ‘Regulation’ button for that hunt, or a private one.  It is noted that buttons either side of the sample are dated 1856 and 1877.

Based on the tailoring and construction, the coat could be from anywhere between 1790 and 1860 (approx), and it has an interesting full breast pocket, rather than a small whistle pocket.  The buttons carry two different backmarks:  P&S Firmin and C&F Bullivant.  The Firmin mark dates it around the 1830s.  The Bullivant mark is one I have not been able to date, but must assume is from around the same period or earlier.

Here are a few images of the coat. 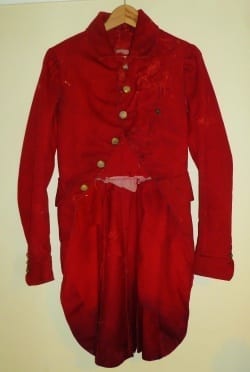 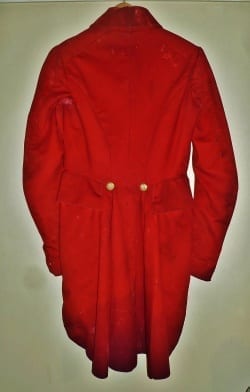 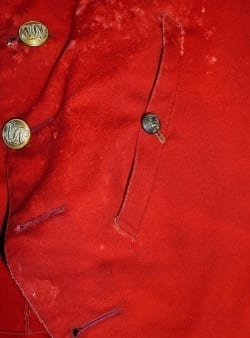 The coat’s poor condition has meant that it has not been able to date it properly, or identify it’s previous owner.

As far as I can find (so far at least) the long list of known packs of fox hounds that hunted the North Durham / Northumberland borderlands does not include one of this name.  Geographically, it must’ve existed somewhere in-between The Berwickshire & Northumberland, and the Wynyard & South Durham hunts respective countries

I wondered if it might be a stag hunt.  Early packs of stag hounds that appear to have hunted that country were Lord Elcho’s – before they changed to fox, and The Tindale, but it could be a private pack of stag hounds along similar lines as Sir Thomas Jones-Parry’s.

Alternatively, it could be a hunt club for gentlemen of the numerous hunts in the region, in the same vein as The Holywell Hunt in Cymru/Wales, The Royal Leamington Hunt in England, The Royal Caledonian Hunt in Scotland, or The Northern Rangers in Ireland.

It’s a mystery that may well remain unsolved unless someone can find documentary references to an active pack of hounds bearing that nomenclature.


3 responses to “The Mystery of The North Durham & Northumberland Hunt. (Solved!)”