Almost two years ago in Sept ’18 (cripes! where does the time go?) I posted a photo of a ‘relic’ button for the Hanley Hunt. Now, thanks to the generosity of metal detectorist Tim Russell I have acquired its larger brother. 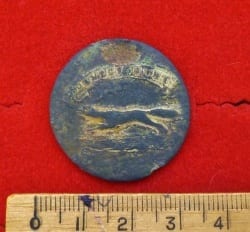 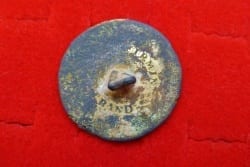 Tim found this 33mm button on his permission in Herefordshire. The S Firmin. Strand backmark puts it, I believe, in the 1771 – 1780 time frame, which certainly correlates with the extra- large size of the button. 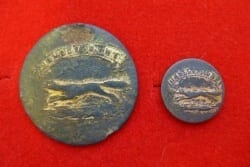 Both buttons have been dug in very similar locations and I had previously wondered if the Hanley Hunt must be related in some way to the Hanley Castle and Hanley Swan area in Worcestershire.

However, BHD’s very own and ever-helpful Peter Brook has offered up a reference to ‘the Pottery Hounds’, based in Hanley’. (quote PB) “It comes from a news report in Bailys (Sports and pastimes) referencing an advert from 1796 in a Newspaper called the Staffordshire Advertiser where the hunt committee (Chairman Mr Edward Keeling) are seeking applications for a new huntsman. There is then a subsequent meet reference in 1797.”

That seems a more likely explanation. Thanks Peter!

It is often the work of detectorists like Tim that advances the knowledge we have of the history of hunting in the UK and Ireland, and their willingness to pass them on to hunting historians and collectors like myself should not be underestimated, because they literally do re-write the history books.