When is a hunt not a hunt?

When it’s a race meeting.

I recently found out that I (and many others) have been wrong about a certain button for years; and it all comes down to the word ‘Hunt’.  Many readers will already know that many ‘jump’ racing associations are called the ‘Something or other Hunt‘ – after all that’s where the term National Hunt comes from.

However, this has (and still can) cause confusion for collectors of Hunt buttons, if they rely on the name and make the obvious assumption.  It is one of these assumptions that I accepted as a collector and of which I have only just been disabused.  This is the ‘offending’ button: 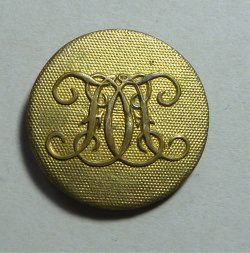 For many years I and many other collectors have considered this button to be the ‘dress’ button for the Fife Foxhounds.   WRONG!  It took me one email to the Fife Foxhounds, regarding another button entirely, to be put straight.  The above button has nothing to do with the foxhounds.  It is the button for ‘The Fife Hunt‘, the horse racing club, and is worn by its members on their evening tails.

One could rightly ask “Why did it take so long to find out that simple fact?”.  Simple answer:  Nobody had previously bothered to check.  This set me to thinking about other examples, and I thought a short article covering the better known ones might be of interest.

As many of the racing clubs began as groups of individuals (usually men) that shared interests in hunting, racing, and dining; most of them have origins that include active packs of hounds, and their annual meetings often included a couple of days hunting as well as the race cards.  Where possible, I will illustrate the hunt button of the original pack of hounds, from whence the Racing Club came. 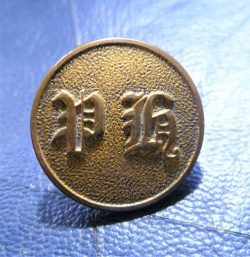 Still very active as a racing club, this button appears (erroneously) in many Hunt button collections; but there are at least two early examples of Perth Hunt buttons that are most definitely hunting related. 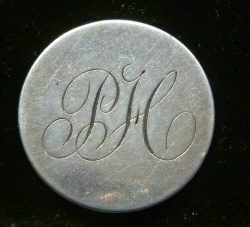 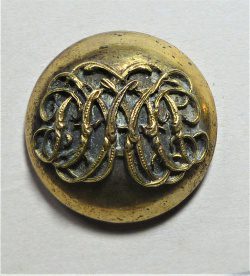 Equally well-known and still active, it was constituted as ‘The Hunters’ Club’ in 1777, which became The Caledonian Hunt in January of 1822, and The Royal Caledonian Hunt in October of the same year, when King George IV became patron.   Firstly, here are two of the familiar club buttons: 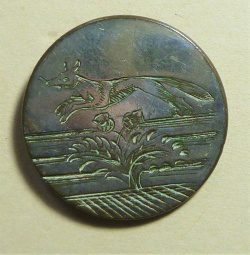 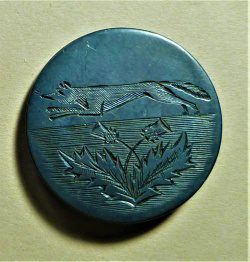 These are found with a multitude of variances of design, material and date.  Some are solid silver.  It may not be apparent in the photo, but the lower button has been professionally blackened as a mourning button; presumably for Queen Victoria, given its date of manufacture.

There is, however, a more grand example, bearing a QVC.  Whether this was reserved for Club officers or senior members, I have yet to discover. 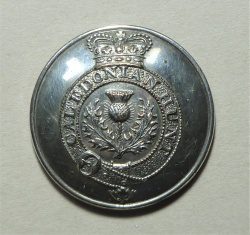 And here is the original button for the Caledonian Hunt – as in the founding pack of hounds. 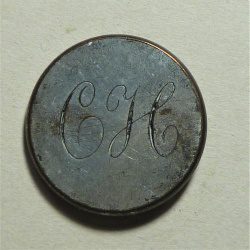 Another button that tends to turn up as a hunt button is the Royal Leamington Hunt Club.  Here are two versions of the club button.  In this case, I don’t know if there was a founding pack of active hounds, and therefore have no ‘original’ button to share. 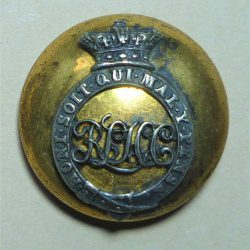 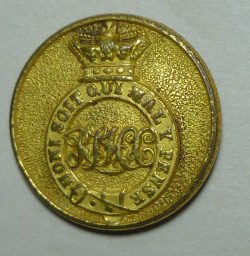 Founded in 1767 and ending in 1830, the Holywell Hunt is a perfect example of the type of ‘club’ to which I refer above.  The club met to hold its race meetings (the club actually built the Holywell Racecourse), but they also hunted fox several times a year, using the Holywell Hounds owned by a Mr Morgan.  Below, are the button for the club (above) and (below) an example of Mr Morgan’s Holywell Hounds hunt button.  It is interesting to note that early tableware for the Holywell Hunt, such as decanters and snuff boxes, carry the HH design of Mr Morgan’s hounds and not the more complicated monogram on the gilt button. 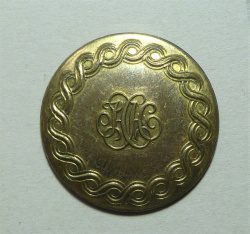 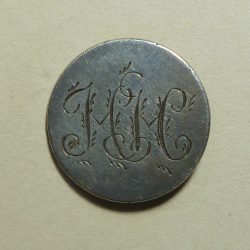 There are numerous other racing clubs and their meetings known as ‘Hunts’, particularly in Ireland where it all began.  Old newspapers will list dates for the Dublin Hunt, the Down Hunt, the Roscommon Hunt; all of which are race meetings, some with the addition of a couple of days’ hunting.  The Northern Rangers being another example.

If I come across any more buttons that I can definitely attribute to ‘racing clubs’, I will return to this subject.  I hope this has been of a little interest to you.