Not having owned a television for more than 20 years, I have never watched Frasier, which was a 1990s American sitcom. But it came to my attention that Petrus 1945 is featured in the Frasier episode “Something Borrowed, Someone Blue”, broadcast in May 2000.

The bottle is presented to Frasier Crane by his father. 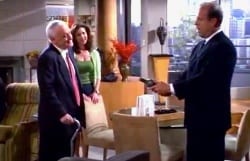 His father replies: “Well, if you’re good, maybe Eddie’ll give you a glass out of his half.”

Frasier is characterised as a “sophisticated” alumnus of Harvard University and Oxford University – the sort of person who’d know about fine wine. (Or at least thinks that they know about wine.) Talking about the ’45, he commits a faux pas when he says, “Well Dad, Chateau Petrus is a premier cru Bordeaux…”.

As any fule kno, there is no formal classification of estates (“crus”) in Pomerol, so Petrus is unranked.

The bottle is passed among various people as a gift and is eventually opened. Frasier and his companions prepare to enjoy a glass, only to discover that the wine is undrinkable: the bottle’s late owner kept their wine rack in a boiler room.

I have had Petrus 1945 only once (which is as much as I or anybody could reasonably expect nowadays). It was certainly drinkable – and probably not genuine… But that is another story