How to Survive as a Hunt Secretary

Dick Watson first took on secretaryship of the Fernie during the War, when he was a ‘very junior member of the Finance Committee’. Money was short and the Hunt could no longer afford to pay a secretary. At the time, it was not a big job, for there were few people hunting, and only a handful of subscriptions to collect. Today there will be close to three hundred. Turnover during the same period has increased almost forty fold. Having been brought up in the country and hunted from childhood, he had no difficulty in knowing, everybody. From this base, he has been able to learn the new names and faces gradually, as numbers have escalated. He feels great sympathy for those coming new to the job today in a popular country.

‘One’s got to be rather like a dentist: extract the right article and leave the patient fairly happy at the end of it all’ is how he sums up his work. When he retired after forty-eight seasons, he had achieved just that. Everyone paid their fair share, yet the secretary remained the best liked and most respected man in the country. Now in his mid-eighties, he continues to hunt two days a week, immaculately turned out and often giving the younger generation a lead across the Leicestershire fences. 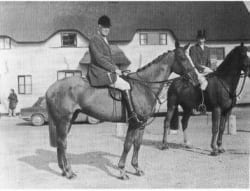 As senior partner in a leading local firm of solicitors for many years, he found the office back-up to which he had access of immense value. But most important of all he rates ‘a helpful wife’. His wife Joan hunted on a horse for the first two decades of his secretaryship, and in a Land Rover for the remaining thirty years. Endless patience is demanded of the Hunt Secretary’s wife or husband, for both telephone calls and personal visits are unceasing. The callers have a wide range of different times for eating, and few make allowances for those to which the secretary and his family wish to adhere.

The Secretary is expected to be a mine of information on every topic, from sartorial questions to weather forecasting. Complete strangers will ring to enquire about a particular horse. With up to 150 out in a day, ‘you can’t really know anything about them. You go hunting to watch hounds, apart from being secretary and watching your field.’

One query which particularly delighted Dick Watson came from a middle aged lady dragged into his yard ‘by a rather noisy spaniel on a lead, barking and jumping about. “I can’t do anything with this dog. Would you have it to hunt with your dogs?” ‘ All his legendary tact and charm were required to persuade her to remove it without taking offence.

These qualities are particularly necessary when collecting money. ‘You have got to collect the right amount, obviously. Sometimes they think they might have been asked for a bit more than you were satisfied with. With the majority of them you make them feel fairly important as part of the game really. The more important they feel, the more generous they are, and if they are not generous it doesn’t do some of them any harm just to be told so, and explain that they’ve got to pay their share.’ When they pay also matters, for expenses continue throughout the summer. A small incentive such s a free meet card for payment perhaps by the 1st September can prove worthwhile. Excuses have changed little over the years: cheques continue to be left on the kitchen table and cheque books finished with monotonous regularity. Even so, ‘for thirty odd years I’d never been done down for a cap’ until the record was broken by a foreigner who could not be traced.

On Opening Meet day in the past the secretary might be banded coins totalling perhaps ten pounds. Today notes and cheques come to thousands of pounds. Many will be thoughtlessly handed over without identification. Dick Watson would use as many as eight different pockets, and train his memory to link each with a particular person. On every day’s hunting it is essential for the secretary to see exactly who is out and know which of these must be asked for money ‘Your horse wants to be mannerly. I was always the first to arrive at the meet. It’s amazing bow easily you do spot late comers even with a big field. It’s all a matter of training.’

‘You’ve got to have a fairly placid nature, because you do get people who could make you extremely angry. The great thing is to sleep on it, but you’ve got to be prepared to speak when necessary.’ If any irate farmer rings up, ‘it’s completely useless entering into an argument: talk about something entirely different. They usually mellow after a while.’ In an extreme case many years ago, Mr. Watson recalls accompanying the Master, in some trepidation, on a visit to a farmer who had actually shot a hound. They talked for an hour without mentioning hunting at all and everyone was extremely pleasant.

Despite its voluntary nature, ‘it seems a pretty full time job. But it’s an interesting job because you get to know what everyone else is doing.’

Usually, when Hunt Secretaries retire, they cease to be members of the Hunt Secretaries Association. Uniquely, Dick Watson was appointed a life member and asked to remain on the Committee. When the Chairman was unable to attend recently, he stepped into his shoes. ‘I reckon I got the meeting through in double quick time too!’ But then, if you are used to fitting two major jobs into your life without ever appearing to be in a rush, and always having time for everybody, that is to be expected.