The latest exhibition to be hosted at Sally Mitchell’s wonderful gallery is the work of Society of Equestrian Artists member Rosemary Sarah Welch . Rosemary’s love of horses started during a six year stay in Arizona. Upon returning to the St. Ives Rosemary went on to study painting with noted still life and portrait artist Leonard Fuller, member of the Royal Academy (RA) and Royal Institute of Oil Painters (ROI).

It was during this time that she also studied with portrait painter and Curator of the Royal Academy, Walter Woodington.  The styles of both these artists have clearly influenced Rosemary’s handling of oils which is both deft, and purposeful, utilising a wide ranging palette to portray movement and subject in a keen manner. 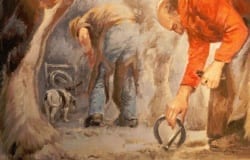 Detail of All Hands 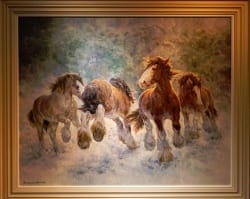 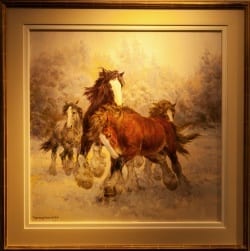 Silly in the snow

The exhibition features predominantly heavy horses, with unrivalled studies of these undisputed monarchs of field and woodland. Rosemary has broken new ground in moving away from simple studies of form and portraying these majestic creatures as playful souls. Of particular note are the studies Silly in The Snow(Pic:1669)  and Snow Flurry(Pic:1666). These oils show us the true spirit of these gentle giants which is beautifully observed and captured in bold sweeps of movement and colour, purples adding regal shine to the coats of these magnificent creatures. That’s not to say that the working days are ignored, from the peaceful study of Farriers at work in All Hands to Extra Pulling Power, where you can almost hear the snorts of effort and jangle of chains, the excitement of the driving pony as she too lends a hand is palpable and adds to the majesty of the scene.

From the open pastoral studies we move to the more sedate, yet none the less important forestry roles, here the felled boles are snigged by horse power, especially on National Trust land. Hauling Timber in The New Forest (Pic:1672), is not only a wonderful study of snigging, but also of how the work is done. It has a timelessness and emotive appeal to it that is almost in any photograph. 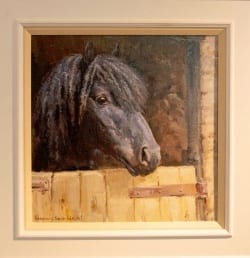 Rest assured ponies and horses are not left out. Little Black Stallion (Pic:1662) and the Motley Crew (Pic: 1658) collection, featuring rescued ponies, are as light-hearted as they are aesthetically mesmerising. When viewed in combination with the dynamic portraits of Water and Fire, Rosemary’s creative and technical brilliance is clear for all to see. 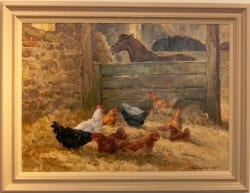 In these all of these fine Oil’s we see the spirit of the horse, not just portraits. From lighter moments such as After You to the dramatic moments such as Into the Wind to the every day routines such as Safely Gathered In (Pic: 1664)  the collection has something for everyone and the curation has been well considered.

Of final note is the simply presented yet beautifully executed Heavy 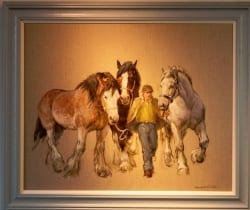 , clearly the exhibitions centre piece. If any single Oil summed up the relationship between the heavy horse and man beautifully it is most definitely this.

All Oils can be seen, with the option to purchase, at Sally Mitchell’s gallery in Tuxford, Nottinghamshire. The exhibition runs from May 24th to June 6th and is well worth a visit.

We update the website on a daily basis including staff changes across the hunting world, images from some of the best hunt following photographers in the world and new incisive and informative articles.

If you are already setup on this new website you can login here.

If you are new to Bailys you can subscribe here.