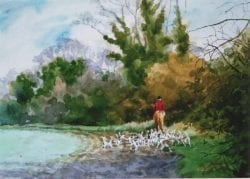 Now, everyone has tried to paint in watercolour, it’s often the first thing you do at school on your first day, so we can all appreciate the sentiment.  But, to become competent and then to be recognised as an artist, particularly in the unforgiving medium of watercolour, takes two things, time and talent. Like most mere mortals I quickly learnt I lacked both and was therefore  easily distracted by the lure of activity with horses and dogs of all shapes, sizes and parentage or the equally strong but more sedentary lure of reading books, both old and new on fieldsports. 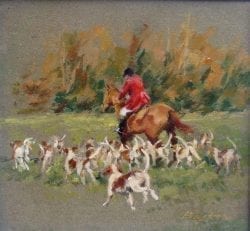 Richard Barton has lived all his life in rural East Kent, in a small village on the North Downs, an unremarkable and therefore timeless village, one that I know well as it is the one in which I spent most of my formative years, careering round its numerous lanes and tracks on horseback, often accompanied by a dog or two.  For ‘Dick’ how 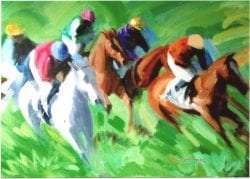 ever it’s a village that has sustained his love of equestrian and country subjects for his paintings. He has always kept horses on the small farm where he has his studio and this has led to a lifelong fascination with them as art subjects together with the ability to convey that fascination and enthusiasm for his subject through the medium of paper and paint, to his audience. 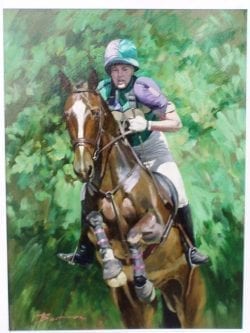 His work can be found in private collections in this country, the USA and Japan. He is particularly popular in the States where art collectors are attracted to his paintings depicting the tranquillity and pastimes of the British countryside and it is this love of the countryside that echoes through each and every one of his paintings, drawing the viewer into the scene through the use of colour and tone.

His talent and tenacity were spotted early and he went to London to continue his studies after which   he undertook illustration and book design commissions for a number of major companies and institutions, among them the BBC, Macmillan, Glaxo SmithKline and Nelson Thorne’s.

Recognition for ones efforts is important, but often traumatic for any competitor whether it be ‘on the flags’ with hounds, in th

e show ring with horses, or in a gallery as an artist, as it means taking the result of hours of effort and putting your labours on display to be subjectively critiqued and ranked . For Dick however this activity has often met with success as his hunting and equestrian paintings in particular have won prizes at exhibitions held at Christies and the Mall Gallery in London.

In 2005 his picture of the Lady Dressage rider won the prestigious first prize in the Best Horse and Rider category at the annual exhibition run by the Society of Equestrian Artists, of whom Richard Barton is an Executive Member. His picture of a ‘Hors Concours’ driving class features on the current British Driving Society yearbook. 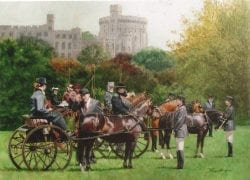 It is not surprising therefore that he is in great demand to run art classes and workshops, what is surprising is that he has both the time and the endless patience to pass on to his students the tips and techniques which he has continued ‘to push uphill’ over a lifetime.