Liam Clancy was born in 1978 into a County Tipperary family which had been steeped for generations in horses and field-sports. 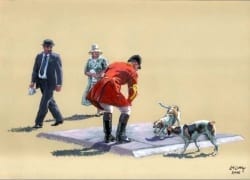 His uncle, Martin Clancy, was for many years master and huntsman of the Shillelagh and District Foxhounds, and Liam developed a passion for hounds from a very early age.
His earliest artistic endeavours involved using tracing paper to copy the hunting scenes on his mother’s Victorian table mats, which apparently bear the indentations to this day!
This ability to paint scenes of field-sports must run through his veins almost as freely as blood does with the rest of us, as throughout his youth in rural Ireland he had far more interest in spending time with horses and hunting than in developing his skills as a painter.
From 1998 to 2001 Liam read a degree in Equine Studies at Writtle Agricultural College in Essex, and it was as this time, as an impecunious student who was far from home at a ‘highly social’ college that he realised he could supplement his social life by working on commissions of portraits of his fellow students’ horses and gun-dogs. 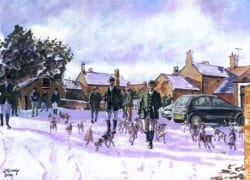 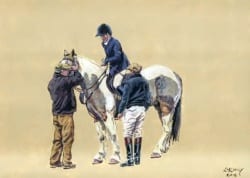 in order to support his life style including working as; a stunt-rider with a medieval jousting troop in Devonshire, a riding instructor in London, and travelled in South Africa. All the while he continued to paint in his spare time gradually finding and defining his style and honing his technique.
During his travels he particularly enjoyed working in the clear, stark light of South Africa, and learned much about using light there. In 2006 he returned to Ireland to try to build up a full-time career as a sporting artist, and the economic recession notwithstanding, there has been a steady growth in demand for his paintings and limited edition prints in the last few years. He takes it as a very great compliment that his hunting scenes have proved particularly popular with hunt servants and those he considers ‘proper hound people’. 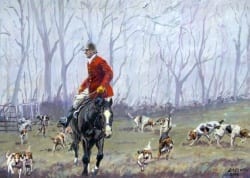 Liam’s talent is gaining recognition from a widening circle within the hunting world as Clancy prints and paintings start to adorn the walls of many a huntsman and Master of Hounds across the British Isles.
To address his growing popularity as an artist Liam is holding a summer exhibition in Abbeyleix to run from June 24th-July 23rd, and at the National Hound Show in Stradbally on July 4th.
For those not based in Ireland or able to attend the exhibition Liam can be contact through Baily’s or through his own web site www.liamclancyfinerart.com for both sales and commissions