Phillip Sanders – from the Kings Troop to ITV.

During my days as a student I came to understand that art appreciation is entirely subjective.  I would visit the Ashmolean, the National Portrait Gallery even, dare I say it, the Louvre and be left emotionally cold by many of  the well-known works hanging there – I may even go as far as to suggest I liked some of them but that was the extent of any attachment.

However given a painting depicting horse or hound (preferably both) then I am, more often than not, completely captivated. I have spent may happy hours just looking at those ‘moments in time’ captured by the likes of Surtees, Amour or Aldin. I was reminded of those feelings looking at the art of Phillip Sanders for the first time, his use of light and shadow brings an otherwise static image to life.

A full time artist since 1975 Phillip Sanders  has previously been featured in The Field, Horse and Hound, Shooting Times, Travelling the Turf, Country Life but is probably best known for his appearance in the ITV series ‘ The Man Who Likes to Paint Horses’ something he has been doing since he was fourteen years old.  This passion for art was assisted when he learnt formal techniques at Hammersmith Art School and Wandsworth Technical College where he excelled in architectural drawings as opposed to the more naturalistic paintings he excels at today. 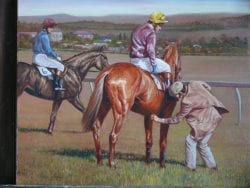 He is probably best known for his racing scenes  but now mainly landscapes, hounds, portraits and horses gaining inspiration from artists as varied as Stubbs, Munnings-  for his use of colour, Ben Marshall for  the theatre that he was able to capture within his paintings and Modigliani for the simplicity of his imagery. 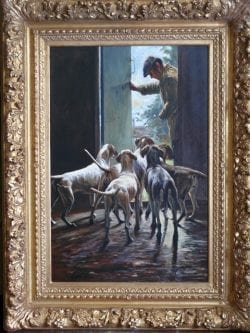 In conversation with Phillip a number of things became apparent: – The first is that despite this recognition that his art has provided him over the years Phillip is keen to point out that he never stops learning and is always striving to improve.  This drive to improve means that  sometimes  works in progress are put away for reworking later thought  and preparation behind the work that is in fact the hardest part which probably explains why to Phillip the final image is only part of the equation  And as much though should go into the framing of the work as the work itself.  This concept that the image is only a part of the experience has led Phillip to develop a passion for old frames so that piece of art should be complimented by its framing. 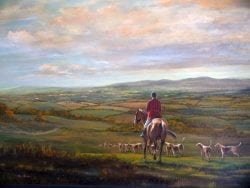 He states that  “It is essential  good art should take ones breath away, whatever medium.  The artist and the audience should be able to live with a piece of art for many years regardless of whether or not it is currently fashionable.”  However this should not be taken as any indication that the artist dismisses modern materials in fact his favourite painting medium  – chosen for its stability regardless of temperatures changes – is marine ply panels which have been carefully prepared with gesso.  Phillip Sanders clever use sunlight and shadows breathe life into an otherwise static image.

I was surprised to learn that during his varied career which has also seen him take seven years to restore a 13th century house  and on  various international journeys from Germany and the middle East, 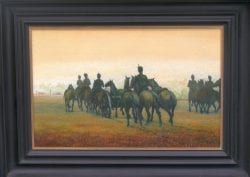 Phillip was also for ten years the as resident painter for the King’s Troop travelling with them to shows including Belgium and Holland.

During our conversation Phillip stated that, to him, money should be the last consideration but selling a little piece of your soul to pay the gas man is occasionally necessary!  Though he enjoyed  having exhibitions at Dickens in Dover Street W.1, Stow-on-the-Wold, New York, Canterbury, London and has sold paintings at Christies and Bonhams in their London salerooms he now paints commissions for US and English clients, plus various hunts throughout the country.