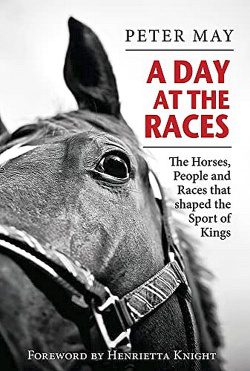 Peter May’s book is not just another book about horse racing or the explanation of a new system of betting etc.
It is however a lively chronological romp through the history of the turf and the great, good and eccentric human and equine characters that have added so much to a day’s racing.
A true bedside or coffee table book, combing as it does short essays covering events involving people, places, horses and events such as the theft of the Gold Cup in 1907 whilst it was on display at Ascot days before the race. About 500 years of racing and race-related tales are delivered in a narrative that is highly readable, and sometimes, unputdownable!

The book is extremely well researched such that even those with many years of following flat to jump racing are sure to discover facts that  ‘you never knew you never knew’. Take for example the tale of Samuel Chifney who started riding in races in about 1775 with a style so successful and in such demand from owners he is acknowledged and being perhaps the first professional jockey. He is credited with developing the ‘Chifney rush’ which involved riding on a loose rein, something unheard of at the time and which involved waiting until the closing stages of a race before making a break for the front. Chifney highly successful if not popular jockey with lots of self-belief. In 1790 Chifney was hired as “rider for life” by the Prince of Wales at a salary of 200 guineas a year. However, in the second year of his commission, Chifney became embroiled in a scandal which would ruin his career and perhaps was the cause of the Prince of Wales selling his entre racing stable as a result of the Prince’s unquestioning support for his jockey.
Later on, Chifney invented a bit for horses, which is still in use. He had hoped the Jockey Club might fund the bit. However, perhaps because of his reputation the Jockey Club declined to support him and he became indebted to a saddler for £350. Things did not go well and he was committed to Fleet Prison for the debt. He died there ‘without seeing the Parson’ aged 52 on 8 January 1807.

Another section termed the Ultimate Sacrifice notes that up to 750.00 steeplechasers most taken from hunting stables died as a result of injury or disease during the Great War. In addition, over 400 hundred jockeys or apprenticed jockeys lost their lives during the same conflict.
Included here is the tale of one ex-jockey, Lt Col David ‘Soarer’ Campbell, winner of the 1896 Grand National who as one of 30 lancers charged and routed 150 of the enemy’s cavalry.
The story of survivor Frank Wise should be an inspiration to many. During the fighting, he lost a leg and three fingers but still managed to win the Irish Grand National on Alike- surely a story that must inspire filmmakers here and perhaps in the US?

Naturally, in a book about racing, there are a number of well-told tales of the great four-legged athletes that underpin the excitement and attraction of the sport.
One such horse that happily transitioned from racing to hunting on his retirement was Denman, the 2008 Cheltenham Gold Cup winner, dual Hennessy winner and victor at two different Cheltenham Festivals. Trained by Paul Nicholls, Peter May tells the story of “The Tank” as he was affectionately known, and his victory over his stablemates, Kauto Star and Neptune Collonges. His rivalry with stablemate Kauto Star provided one of racing’s most famous battles.

Gripping tales of other well-known horses such as:- Mill Reef, Brigadier Gerard and Aldanti are given space in a volume of only 240 pages but perhaps one the most poignant tales is that of Shegar who was abducted along with his groom Jim Fitzgerald in February 1983. A ransom demand was met with a request for proof of life but it never came, and Shegar was never seen again.

The book had a very useful chronology and reference section and I commend it to anyone wanting to devise quiz questions for hunting or sport-related quizzes.

A highly engaging work that was a delight to review and from which anyone with a passing interest in horses and horse racing will derive hours of pleasure.