Land of Milk and Honey Digressions of a Rural Dissident

Land of Milk and Honey Digressions of a Rural Dissident 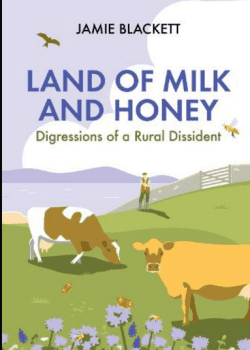 If you have read our our review of Jamie Blackett’s previous book ‘Red Rag to a Bull’ you wil know we described it as :-

“a  highly readable book that will make you laugh; sad; angry; despair and yet become better informed about rural issues and one person’s attempt to retain some sort of rural perspective in an increasingly urban world. If life were fair this book would become a ‘classic’ text….”

Prospective readers will be delighted to hear that the sequel is just as accessible and once again almost unputdownable. Though written by an obviously proud Scot and centred on Scottish challenges in both rural and political life, the book is both informative and enjoyable regardless of one’s geography.
Challenges and their stories come thick and fast together with fundamental change such as the headaches and heart aches that accompany a survival dependent decision to switch from Beef production to a high tech pasture based dairy model. This leads the reader through some of the externally imposed challenges faced by farmers today.
‘Off farm’ challenges including the Machiavellian intricacies of Scottish Politics, dogma driven environmentalism, and the myriad of deceits supporting the Animal Rights agenda are highlighted and their impacts explained by the author as he tries to navigate the murky waters of ‘regenerative agriculture’.

The book’s lively tone is regularly interspersed with snippets of life both at home in Arbigland, such as the concerned for the rest of the herd when a cow appears to present the classic symptom of BSE. However concerns about a notifiable disease were quickly abated as he watches the ‘affected’ cow get in position to perform what appears to be a session of bovine Pilates aided by the resistance provided by a water trough, after a short stretch against the trough she walks away, ‘cured’.

Dealing with farming payments based on EU Agricultural policy has, from personal experience, always been a bureaucratic nightmare even since someone, somewhere, decided the Rural Payments Agency should be staffed solely by those with no knowledge, experience, or interest in agriculture. From the author’s experience it seems nothing has changed, and without wishing to be overtly political surely this anachronism could be dealt post Brexit by a government willing to listen and learn?
What has changed it seems, is the attitude of some in banking towards farming which by its nature will often be ‘asset rich but cash poor’. Today’s bankers it seems are more willing to listen and not offer massive loans for farm improvements in a good year and then regardless of a contract that may be in existence cite ‘market challenges’ as the rationale for immediate repayment of any loan made and an absolute refusal to consider any further funding, an attitude which has over the last two decades forced a number of experienced but ‘small’  farmers all over the UK to leave doing what they love and sell up.

The impact of Covid and the ‘lockdown’ is covered both from the perspective it had on family and friends and the wider world.
In the UK remaining ‘united’ the tales that come from the work done by the author and George Galloway in setting up the new Unionist party A4U are surely worth a volume of their own. It will not be a spoiler to recount here that they did not win, but they did highlight much of the absurd nature of the Kafkesque/Orwellian thoughtspeak that currently emanates from Holyrood.

One of the more surprising conclusions of the review is that the United Kingdom would be in a better place to deal with the disgruntled of Brussels if there were more politicians with the intellectual capacity and oratory skills of George Galloway.
Mr Blackett’s interaction with George Galloway becomes more than just the sort of relationship he had with another political maverick Nigel Farage about which Galloway tweeted: “We are not pals. We are allies in one cause. Like Churchill and Stalin” and seems at times as they fight together for A4U to become one with kinship and respect at its centre.

The Conservative landslide should have been good news for rural areas, BUT Jamie Blackett echoes the long-held perception by many rural stakeholders that pressure groups who ought to have been ready to maximise this new visibility for the benefit of their members were too slow to take advantage of the opportunities that appeared. The iniquity of the provisions of the Hunting Act could, and should, have been on the agenda for discussion post election, but as we now know any such opportunity was swiftly and deliberately kicked into the long grass as the focus turned to ‘Getting  Brexit Done’  As a result,  the gulf between those involved with trying to navigate through the Hunting act to provide a rural service, and those who used the Act as a starting point for prosecutions, based on what they and their supporters like to think it said as opposed to what it actually does say, continues to cause tension between aggressive activists buoyed by a few, but noisy virtue signalling politicians and the media on one side, with down to earth rural folk firmly on the other.

The mention of hunting with hounds whether they be Bassets or Foxhounds both hunted in compliance with the Scottish Hunting Act will no doubt stir memories of hunting quarry before the ban, and the possibility that, despite the findings of Lord Bonomy’s Report, the deliberately vindictive and politically driven actions of those who ‘know better’ will be one of the unintended consequences eradication of foxes in any meaningful numbers from the Scotland.

Throughout the work there are delightful seasonal vignettes concerning the lockdown periods where the author reflects on the opportunity cost of the mandated isolation such as the ability to interact with friends and family, and the opportunity such isolation provides to really observe and take delight in nature and seasonal change.

All in all another highly readable and thought provoking work from Jamie Blackett. Perhaps just perhaps someone will have the foresight to make the work mandatory reading for Defra policy teams though the chances of doing the same at Holyrood seem infinitesimally remote.