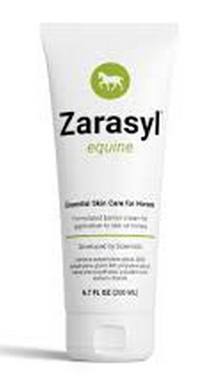 Over the last few weeks, we have been delighted to be allowed to trial a new product from Ireland called Zarasyl. Zarasyl is described as a “Preparation for skin barrier for wounds and abrasions.” As such it might be thought to be another of those products claiming to do the same thing or at least something very similar – it is a crowded market space- so what makes Zarasyl different?

In simple terms, it works and the positive impact it has had during our trials on a number of skin issues on both dogs and horses was obvious very early on. Zarasyl comes in a 200ml tube and is about the consistency of toothpaste. In use we found that the tube application with a screw-on top can make it difficult to apply when you have a  restless horse and have one hand supporting a leg and unscrew the top of the tube and then put the cream where you want it whilst the patient has reached boredom and all this without losing the top and seal the tube before it gets lost or trodden on. Applying the cream effectively was found to be much easier with an assistant!

Zarasyl is based on silicate chemistry which is known to have a positive effect on collagen and other vital tissues. We would normally treat raw irritated skin conditions with products such as redoubtable udder cream where the symptoms are alleviated but often not the route cause. However, in deploying Zarasyl an improvement in the skin condition and the stress level of the patient (horse and hound) was noticed within 24 hours and though this is not a miracle cure it certainly had a positive impact on both recovery times and the quality of life for the patient even if the soreness was in a very delicate area. Compared to other ‘lotions n potions’ out there it could be perceived that Zarasyl is not the cheapest cream on the market. However, the particular formulation in Zarasyl is highly effective and worked even where previous applications of other traditional remedies had not delivered any noticeable improvement – in short buy this product as part of your essential kit  -it works! For further information contact www.zarasyl.ie